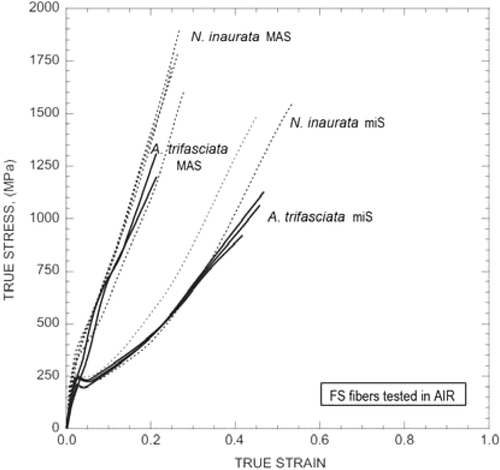 The mechanical behavior and microstructure of minor ampullate gland silk (miS) of two orb-web spinning species, Argiope trifasciata and Nephila inaurata, were extensively characterized, enabling detailed comparison with other silks. The similarities and differences exhibited by miS when compared with the intensively studied major ampullate gland silk (MAS) and silkworm (Bombyx mori) silk offer a genuine opportunity for testing some of the hypotheses proposed to correlate microstructure and tensile properties in silk. In this work, we show that miSs of different species show similar properties, even when fibers spun by spiders that diverged over 100 million years are compared. The tensile properties of miS are comparable to those of MAS when tested in air, significantly in terms of work to fracture, but differ considerably when tested in water. In particular, miS does not show a supercontraction effect and an associated ground state. In this regard, the behavior of miS in water is similar to that of B. mori silk, and it is shown that the initial elastic modulus of both fibers can be explained using a common model. Intriguingly, the microstructural parameters measured in miS are comparable to those of MAS and considerably different from those found in B. mori. This fact suggests that some critical microstructural information is still missing in our description of silks, and our results suggest that the hydrophilicity of the lateral groups or the large scale organization of the sequences might be routes worth exploring.